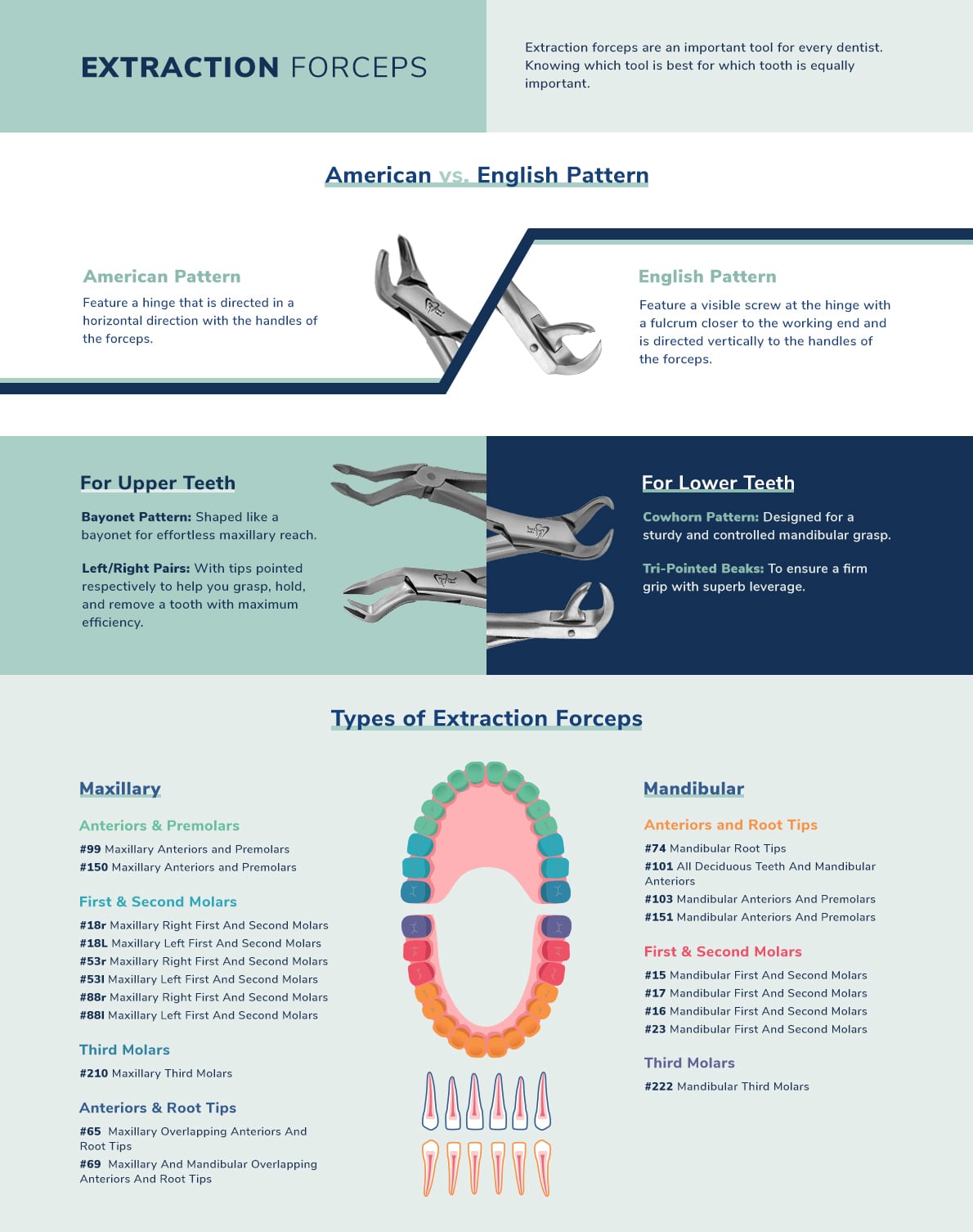 Extraction forceps are among the most valuable tools a dentist has at their disposal, but knowing which tool is best for which tooth is just as essential. Let’s look at the different types of extraction forceps and see which one is the right choice for each tooth.

There are two commonly available design patterns in extraction forceps — American and English. English extraction forceps use a visible screw at the hinge that brings the fulcrum closer to the tool’s working end. The English forceps allow for greater leverage than you’ll find in American-pattern forceps, which use a horizontal hinge.

When working with the upper teeth, two types of extraction forceps provide the best angle and grip.

Left/right pairs use pointed tips to grasp, hold and remove teeth with maximum efficiency. They have angles to accommodate the unique challenges of different sides of the mouth and come in location-specific designs for extracting anterior, root or molar.

For lower teeth, there are also two options — cowhorn patterns and tri-pointed beaks. Cowhorn forceps are best for a sturdy and controlled mandibular grasp and get their name because when open, they resemble a pair of horns like you might find on a bull.

Tri-pointed beaks provide both superior grip and leverage and, like the left/right pairs for the upper teeth, come in anterior, root and molar varieties.

Each pair of extraction forceps is specific to a particular tooth or set of teeth. The ideal solution will depend on the tooth’s location and age. We’ll start with the best choices for maxillary extractions.

For anteriors and premolars, #99 and #150 forceps are the ideal choices. The #99 forceps have a straight handle and beaks that conform to facial and lingual root contours. They’re also universal, working for right and left quadrants. The #150 forceps offer similar benefits, using contoured beaks apical to the cervical line.

The #18L, #18R, #53L, #53R, #88L and #88R are the best choices for maxillary first and second molars. Each has L or R markings designating the left and right quadrant, and each beak has a different design to adapt to the maxillary molar roots as needed. The #210 is the choice for third molars, equipped with a universal bayonet design that works equally well for both quadrants.

Finally, for mandibular third molars, the #222 forceps are the best choice. The universal bayonet design easily conforms to facial and lingual root contour.

Whether you’re extracting one tooth or many at the same time, having the correct tools in your arsenal can make all the difference.

Facebook Twitter Email Pinterest linkedin
Newer How to Keep Your Dental Instruments Sharp
Back to list
Older A Guide to Dental Impression Trays
close
Start typing to see products you are looking for.
Shopping Cart
There are no products in the cart!
Scroll To Top